When I was in seminary, my required church history class had an optional Friday session where we could learn about Christian art and symbolism. It was at 8am, which, if you don’t know me, is basically my idea of the worst thing ever. Nevertheless, nerd that I am, I went to most every one because I am a total sucker for symbolism and imagery. My husband learned this the hard way when he took me to London early in our marriage and I dragged him into every last church and catacomb, pointing out the etchings on the ends of pews and explaining the story in the stained glass windows and going ape crazy about the symbols on the creepy sarcophagi (tombs). As we say in Texas, bless his heart.

Anyway, this is probably why I love Orthodox icons, because they are basically works of theology done through art and symbolism. Forget reading 200 pages; just have an Orthodox priest describe one icon to you and you’re good to go. One of my favorite symbols in iconography is called a mandorla. (Note: not mandala, which is another cool word but not what we’re talking about today.) Mandorla actually means “almond” in Italian, but it also happens to be the shape you get when two circles begin to overlap one another, like this: 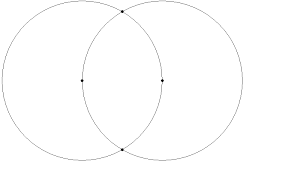 A mandorla is a visual way to describe that Jesus unites the heavenly and earthly realms. Jesus is the mandorla, and because he occupies this bridge space, it is a symbol of glory and majesty. When we say Jesus is Lord, we do so because he brings together heaven and earth. The mandorla shows up most often in icons depicting the Transfiguration, Easter, and the Ascension. You could say it shows up in moments of the gospel when something “beyond” normal happens. To understand Jesus standing on a mountain talking to Moses and Elijah, who, you know, happen to be dead, you have to look at it a certain way. How can Jesus do this? Well, because he is the mandorla, and he holds together lots of different realms, including, as it were, the living and the dead. The mandorla is a way of telling people that we are going to have to see this thing differently, because we’re dealing with something beyond our everyday knowing. I love how the Orthodox liturgy for Transfiguration puts it:

On the Mountain You were Transfigured, O Christ God
And Your disciples beheld Your glory as far as they could see it;

As far as they could see it. Another part of the liturgy says the disciples beheld his glory as far as they could bear it. In both cases, the sense is that we are seeing something beyond “normal” but also reminds us that because it’s beyond normal, we aren’t seeing all of it. Frankly, that in itself gives us a lot to ponder. Jesus is fully human and fully divine. Jesus is the firstborn of new creation, in which heaven will come to earth and be united to it. But wait- cue announcer voice- that’s not all!

Notice in the icon above that the outer ring of blue is light and the middle ring is navy and the innermost ring is almost black. That is meant to signify that the further we travel into the glory and majesty of Christ, the more mysterious it becomes. We see some of it, on the periphery; we may even see the depths of its meaning centrally, but at its core, the beauty of this is beyond human comprehension.

Of course, it wouldn’t be a good symbol if it didn’t have multiple layers of meaning, so the mandorla also beckons to mind the imagery of almonds, which was a symbol for new life in the ancient world. That’s in part because the almond tree was often the first to blossom–in January, no less. But the almond also has biblical imagery, from this passage in Numbers 17:

17  The Lord spoke to Moses, saying: 2 Speak to the Israelites, and get twelve staffs from them, one for each ancestral house, from all the leaders of their ancestral houses. Write each man’s name on his staff, 3 and write Aaron’s name on the staff of Levi. For there shall be one staff for the head of each ancestral house. 4 Place them in the tent of meeting before the covenant, where I meet with you. 5 And the staff of the man whom I choose shall sprout; thus I will put a stop to the complaints of the Israelites that they continually make against you. 6 Moses spoke to the Israelites; and all their leaders gave him staffs, one for each leader, according to their ancestral houses, twelve staffs; and the staff of Aaron was among theirs. 7 So Moses placed the staffs before the Lord in the tent of the covenant.

8 When Moses went into the tent of the covenant on the next day, the staff of Aaron for the house of Levi had sprouted. It put forth buds, produced blossoms, and bore ripe almonds.

So the mandorla also depicts chosen-ness.

Lastly, the mandorla looks also a bit like the top of a flame, and in this way it calls to mind the truth that Christ is the Light of the world.

Notice how the symbols build on and illuminate one another: Jesus is the Chosen One, and he therefore unites heaven and earth, and in doing so he is the Light of the world who brings forth new life.

So, there you have it for this week’s Word: mandorla. Keep an eye out for it when you’re pondering icons or visiting churches.