As we near the release of my latest book, some people have mentioned that there is already a book–and not just any book, but a beloved book by Matthew Fox–which was published with the name Original Blessing twenty years ago. 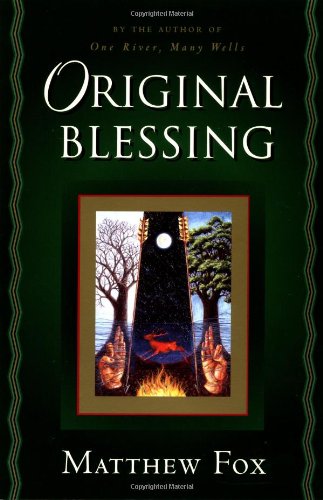 Why on earth would I choose to give my book the same title? Well, here’s why.

First of all, it isn’t the same. exact. title. The full title of Matthew Fox’s book is Original Blessing: A Primer in Christian Spirituality Presented in Four Paths, Twenty-Six Themes, and Two Questions.  The full title of my book is Original Blessing: Putting Sin in its Rightful Place. Though the subject matter of both books is about original blessing, the scope and content and style of the books are very distinct.

It’s actually pretty common for books to have the same titles when they are dealing with the same subject matter. If you search for books entitled “Jesus” or “The Bible” or even something more specific like “Christology,” you’ll see they all share the same main title and have distinctive subtitles. The difference in this case is that books on original blessing are not altogether common…yet. But I hope one day they will be.

So. The reason I chose the title original blessing is because I want to honor the phrase Matthew Fox coined, and I want to encourage as many people as possible to use the same term. It is the absolute perfect name for it.

I did consider coming up with a new name. Original goodness was a big contender, because that comes straight from the Genesis story itself. But the word goodness has a lot of baggage connected with it because we have so many assumptions already about what it means, and it can get really dicey to talk about goodness while also trying to talk frankly about sin. I would have spent half the book just trying to explain what I mean and disentangle it from what I think you might wrongly assume I mean. Also, in the history of theological arguments between original sin and original goodness, I noticed how proponents of original goodness had a slightly different argument than I have, in part I believe because of the name. I am not interested in swapping out the statement “all people are bad” to the statement “all people are good.” In our current parlance, both of those statements are deeply problematic. Also, when you say original goodness it sounds like a solid state of being, and I didn’t want to convey that exactly either. So…original goodness is much like the first bowl of Goldilock’s porridge, which was not quite the right temperature.

Original grace is close, because it conveys a little something more of a gift and a free offering from God than does the more stark phrase original goodness, but it gets entangled with the kind of grace we receive later, as a covering over our faults, and that was going to distract from the very nature of what I wanted to say. The revolutionary thing about original blessing is that it is something given to us before we need grace at all, and I think people get confused enough about grace without adding this other layer of nuance to it. Grace is so important, and I decided to leave that word where it belongs in the theological narrative and not try to bring it all the way forward to Genesis. So, like the second bowl of porridge, original grace was not quite right either.

In the end, the word blessing simply carries with it all the connotations I believe this original and sacred gift embodies. We begin life with an original blessing, this beautiful and unbreakable gift from God. And that’s very, very important- the idea that original blessing is more than just our given nature (our state of being), or anything connected to our actions, but it is first and foremost a gift. There is a posture implied in the gift-giving and the gift-receiving/gift-reflecting that is absolutely central to the whole beauty of original blessing. (And I didn’t want to use the term “original gift” because that can become dangerously capitalistic-sounding, which would be a move in the wrong direction.) Original blessing is the first and most central gift God gives to creation. From this, everything else flows.

When Matthew Fox wrote his book, he revived a forgotten theological tradition that began thousands of years before, and expanded upon it in ways that have transformed so many people’s understanding of themselves and of God. I am deeply grateful for his work. And because of that, I do not feel the need to reinvent the wheel or get points for coming up with a new name for it or pretend like it is a brand new idea that I discovered. I am standing upon a tradition (albeit an overshadowed, forgotten one) that has come long before me and that I pray will endure long after I’m gone. And I could not be more thankful to Matthew Fox for coming up with the absolute best phrase to describe this idea. There is no need to use another. What is needed is for as many people as possible to recognize and understand and use the term. What is needed is a movement of people who choose to see the world through the lens of blessing instead of the lens of original sin. Because for every person who has read Fox’s fabulous book, there are plenty more who haven’t, and who have never heard of any other alternative to original sin.

And because original blessing must contend with the juggernaut idea of original sin, which has held majority sway in Western Christianity for fifteen hundred years, we do not have the time or the luxury to be quippy or trendy or unique. If we are to stem the tide of original sin’s hemorrhaging wounds, we need to be united and committed and all-hands-on-deck about it. We need to google books on original blessing and find not one of them, not two of them, but ten or fifteen or a hundred of them. We need to replace this story with the better story that came before it, in every way we can.

The sooner the better. :)