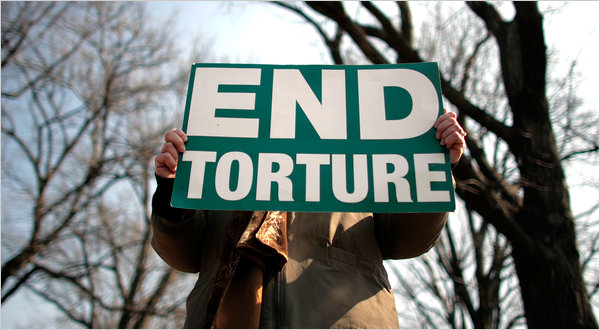 Friends, torture and brutality surround us these days. Our inclination is to turn away, but our faith requires us to stay put, to listen, to speak out. So today, here are some words of wisdom from our German friend who does not speak of torture from a distance, but as a former POW who had to hear stories of his own country doing terrible things to people that he could not single-handedly stop but nonetheless felt implicit in allowing. The selection is from a chapter in Jesus Christ for Today’s World. If you missed Moltmanniac’s post on this chapter last week, do yourself a favor and go read it right now.  He’s covered much of the material in the chapter so I won’t restate what he says so well. I posted a bit of this chapter recently as well in a post discussing Jesus as the brother of the tortured.   So, the section below is geared toward where I think most of us are: we are not the tortured, or the torturers. We are the onlookers. But we still have an important role to play in how we respond. Here’s Moltmann:

Victims, we said, have a long memory, for they still carry the unforgettable scars of their suffering. Those who caused that suffering have short memories. They don’t know what they have done and don’t want to know. So the perpetrators are dependent on the victims if they want to turn away from death and enter into life. No expiation can be offered to the victims; the wrongdoers can at most participate in initiatives which are a symbol of expiation, as a way of regaining their self-respect.

I always became painfully aware of the barbed wire round the prisoner-of-war camp when a transport left to go home. Then we smelled a whiff of liberty, and it made us totally ill. When freedom is near the chains begin to chafe. When our interest in life is awakened we begin to protest against the powers of death. When once we feel the hunger and thirst for righteousness and justice we are no longer prepared to accept injustice; we fight against it.

So let us strengthen the will for life, our own life and the lives of other people and other created beings. Then the forces that resist torture will awaken too. Let us spread the hunger and thirst for righteousness and justice. Then the injustice will be felt as injustice, and will be manifest as such, and will be ended.

Three things I want to point out. First, for all the discussion about white privilege, I think the first two sentences of this section do much to clarify what it means. White privilege- or any privilege, for that matter- has the ability to forget. We can have short memories, because we don’t know what we’ve done and don’t want to know. This is something victims can never do. They can never be forgetful about their suffering. It lies heavy upon them, like a weight. They bear the scars. They do not forget. They must endure. That is the first thing to know as we watch these scenes unfold on the streets in Ferguson and around the country, and in response to the CIA torture report released last week. God forbid we would ever be flippant about these matters, but I think it’s important that we remember that walking away from these stories and forgetting about them is a luxury and a sign of our privilege. Victims don’t share that. They aren’t nursing grudges. As Moltmann says, they are carrying “the unforgettable scars of their suffering.”

Second, as Christians we declare that Jesus is the Judge of everyone, and this includes the torturers. So imagine this picture in your mind:  a CIA agent stands before Jesus, who is bloodied and beaten. Jesus is not only the judge, but also the victim. Yes, I am equating Jesus with a potential Al Qaeda operative. If you don’t understand that, then you should never quote the “Roman Road” or claim that you believe Jesus died for sinners. Because that’s exactly what that means. Jesus stood in the place of all sinners- even those at Abu Ghraib. He stood in the place of the very people who beat, abused, mocked and killed him. He prayed, “Father forgive them.” He is the judge, but do not ever forget that he is also the victim.

What does one do when faced with the truth of his own brutality? Moltmann says “the torturer recognizes himself for what he is.” That’s our hope, right? That when confronted with Jesus, our mask falls away and we can accept the moment of truth, hard as it may be.

Imagine an armed police officer standing before Jesus. Under what circumstances does the police officer feel justified in taking the life of this innocent, unarmed man?

Before Jesus the judge, we encounter Jesus the victim, and we are found guilty. We see ourselves for who we are. We cannot excuse our violence.

Thank God, judgment is not the end of the story. It is the new beginning, for in our admission of guilt, we are given a path to new life. This is what Moltmann means when he speaks of a “justice which creates new life.” It is not punitive judgment. It is reconciling judgment. Yes, you are guilty for torturing, for pulling the trigger. Now that you see, now that the mask has fallen, you are on your way back to life. You can turn away, make amends, reconcile. But even when you do so, your victims will always bear their scars. That’s the reality this side of new creation.

Third, Moltmann gives those of us who are onlookers a way to understand our role. Our role is to be people who are deeply interested in life being awakened. When we do that, we begin to protest all the powers of death- police brutality, murder, torture, abuse. We become resistant to the forces that attempt to obscure the good and full life God desires for every person, for every created being. We cannot stand for it. We must fight against it- but not with the tools of death. We fight with a hunger and thirst for righteousness and justice which does not shy from judging those who need to be judged, but does not rest until those same perpetrators have come all the way around to redemption.