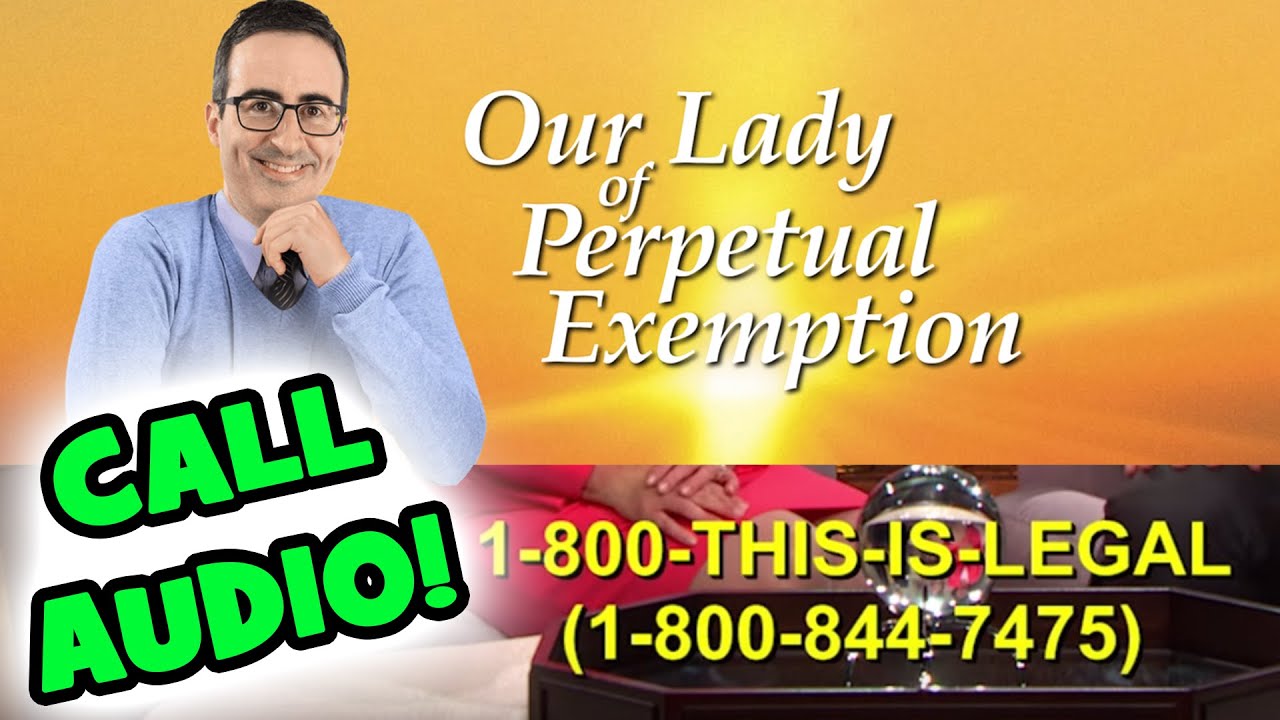 Last month, comedian John Oliver confronted the problem of televangelism and the prosperity gospel head on during an episode of Last Week Tonight. As a way of showing how easy it is to claim nonprofit status and get people to send you money, he set up a church himself, called Our Lady of Perpetual Exemption. Over the next month, people sent in over ten thousand dollars, mostly in one dollar bills, as well as a number of other gag gifts. This week, Oliver decided to shut down the “church” after receiving some gifts that…well, he didn’t want to find in the mail anymore.

I hope I don’t have to write anything about the fallacy of the prosperity gospel here. Obviously, you can’t find anything in the life of Jesus to suggest he was interested in shoring up money for anyone. If anything, what we see is a clear disdain for systems exactly like the prosperity gospel, where people intertwine God with money in ways that adversely affect the poorest among us. He didn’t turn those tables over for nothing, you know. (On that note- my friend Doug Pagitt’s new book Flipped has a powerful commentary on the story of the widow’s mite. It’s worth the price of the book. I won’t ruin it by telling it to you here- just go read it.)

So I don’t want to say anything more about that.

What I do want to say is this: the most powerful thing John Oliver did to expose the fallacy of televangelist stewardship was so subtle you may have missed it entirely. It came at the very end of his segment announcing the closing of Our Lady of Perpetual Exemption, when he mentioned that all the money donated was being sent to Doctors Without Borders.

Think about that for a minute. John Oliver does a segment on the injustice and questionable ethics of televangelists, and then goes over the top to create a ridiculous “church” to parody the whole charade, and then gets a lot of money sent into him as an extension of the parody…and then he subtly and without fanfare goes and does the very opposite of the entire charade. He becomes the very epitome of the kind of generous and humble giver the church should be cultivating.

There was no reason for him to do that, really. All the people who sent him a dollar would probably not have minded if he decided to take his whole staff to Vegas for the weekend with the money, or upgrade the furniture in the lounge, or throw a really over-the-top holiday party. Sure, they’re an HBO show with a good budget, but who wouldn’t have liked a random bonus check in September? Heck, as the “Pastor,” Oliver could have decided to keep all the money himself and splurge on something. He could have chosen to do any number of things that he could have then turned into yet another segment on televangelism, showing him riding around on his new motorcycle or living it up with his producers in a Vegas penthouse. Nobody would have batted an eye at that, either. One dollar for all the funny John Oliver brings us? That’s a bargain. Take the dollar, John. We really wouldn’t mind.

What he did, instead, was an act of stewardship. When given a windfall of unexpected money, he gave it to people seeking to make the world a better place. He didn’t give ten percent of it, or even half of it. He gave all of it away, with zero fanfare.

So, out of a segment on pastors with $65 million dollar private jets, a group of prankster audience members and a comedian from Great Britain end up giving $10,000 to Doctors Without Borders.

The gospel shows up in the funniest places.