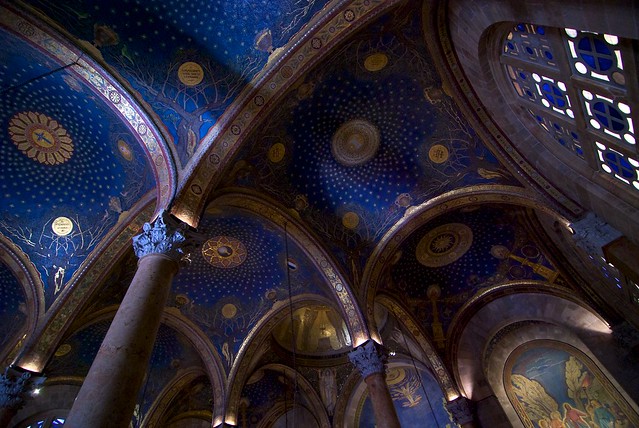 I’m remembering two places I visited in Jerusalem. First, not surprisingly, is the Church of All Nations, which is located in Gethsemane. This may sound strange to say, but it was one of the most meaningful and beautiful churches I visited on my entire trip. It’s hard in a photograph to capture the aesthetic of the place, which is dark purples and blues, like a blanket of sadness. I’m holding that space in my mind tonight, as well as the majestic olive trees, some of which have stood just outside the Church’s doors for over a thousand years. God be with those who are suffering and alone tonight.

Secondly, I remember the Church of Gallicantu, which is debated to be the location of Caiaphas’ house, where Jesus was taken after he was arrested. As you recall, he was kept overnight before his trial the next day. I asked our guide, Nabil, whether he thought this was the place or not, and he said that some early Christians must have thought so, because they marked the hole of one of the chambers inside with a small cross as if to say, “This was the one where they kept him.” (In this photo below, you can just see the cross etched in if you look closely. Down below was the chamber.) I don’t know if this was the one or not, but I can say this: standing in that cold chamber, looking up at the hole from which they dropped prisoners down, and seeing that small cross…the aura of the place evoked something very close to a sadness of the innocents, a feeling of wrongful imprisonment which has happened to far more people than Jesus. I’m thinking about that tonight, too, and about my friend Kent who has spent his Lent in solidarity with criminals, guilty and innocent alike, by wearing an orange jumpsuit instead of his normal lawyer suit.

It’s the eve of Good Friday, and I’m sad. I’m always sad. I’ll be sad tomorrow, too, and Saturday.

And part of me doesn’t want to say this, because it’s trite and because I firmly, deeply believe in holding space for this death and this sadness, but it’s also just true… I’ll be sad, but I also know Sunday’s coming.

So let’s go down into the darkness bravely. Let’s stay there as we must. But let’s remember the story continues, too.